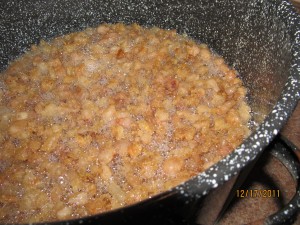 CHRISTIANSBURG, Va. – Surely two 40-plus women enjoying a glass of red wine and some Trader Joe’s cocoa truffles late on a Saturday should not giggle so loudly. But the tinkling sound of two dozen canning jars full of hot, honey-yellow lard sealing themselves sent us into paroxysms.
“Oh, there went another one. And another one! He He!”

We were celebrating an afternoon spent reclaiming the self-sufficient heritage that since the 1950s has almost been lost. Despite the sneering of many who do not share our love of hill country food, we relished the day spent cubing and rendering about 30 pounds of white pork fat to put by for the winter, and to give at Christmas to a few select family and friends.

Moreover, I planned to make some Christmas pies with my share of the

backwoods treasure. And the “cracklin’s,” which are the crunchy bits left after the rendering, would go into cornbread.

Some had already told me to keep my lard. Which at first made me chuckle, because initially I enjoyed the shock factor. But after a while the condescension got to me. Rural foodways are still good for a sneer – even among the people who are their heirs.

Lard can be found in ethnic markets, especially Mexican grocery stores and even in some supermarkets in areas with immigrant populations. But leaf lard, the highest grade of lard, is special, and harder to find. It comes from the soft fat around the kidneys and the loin of the pig, so has a neutral, non-piggy flavor.

And, it’s recommended by the lovably cranky founder of Cooks Illustrated magazine, Chris Kimball. In fact, Kimball had many years ago piqued my interest about leaf lard in a column he wrote for the magazine. But being unsuccessful finding it in the grocery store, I hadn’t had a chance to experiment.

Then, a few months ago I was reporting a newspaper story about a butcher, and as I watched him cut up a pig, he pointed to the leaf fat. He went on to lament that there was no market for it. Rather than going into flaky pies and crisping up fried chicken, the fat was sent out with the other scraps to a protein recycling company.

I told my friend Ellen about it. Unlike me, her family had kept alive most of the old food ways, from shearing their own sheep to raising their own eggs. She too missed the flavor of perfectly fried potatoes and onions, and the flaky, moist pie crusts leaf lard yields.

I had never tasted this delicacy. My grandmother, like other women of her generation discarded most of the foodways of her Grayson County ancestors for frozen pie crusts and tubs of Crisco touted in magazines and on television. Her favorite pie was a boxed concoction called “Dream Whip.”

My mother went further, feeding me almost exclusively from boxes and cans. When I left home at 18, I swore I would never eat another serving of “instant” mashed potatoes.

Luckily, this prejudice against real food is easing, as urban chefs, food writers and young, urban foodies in their apartment kitchens are looking back to their great grandmothers’ pantry shelves for alternatives to what Michael Pollan others call “Frankenfood.”

According to a recent piece in Food&Wine magazine, lard contains just 40 percent saturated fat, compared with nearly 60 percent for butter. Its level of monounsaturated fat (the “good” fat) is 45 percent, double butter’s 23 or so percent. Because lard can be heated to higher temperatures than olive oil or butter, food fried in it absorbs much less fat.

On Sunday morning, I picked up each pint jar of lard, now turned a milky white. I peeked in the freezer at the gallon Ziploc bags full of cracklin’s. Then I turned back to my Christmas list, and, like Santa, marked which had been naughty, and which had been nice.

Add the flour and salt to a mixing bowl, followed by the lard. Cut the fat into the flour with a pastry tool, or by pinching and mixing with your fingers. Add the very cold water, and mix together with your hands until the dough comes together. Don’t overmix – it can be a little crumbly. Turn the dough onto a floured counter, and knead, pushing the heel of your hand through the dough (like you’re smearing it on the counter). After 2-3 mintues
of this, gather the dough into a circle, wrap in plastic wrap and place it in the refrigerator for 30 minutes (or 10 minutes in the freezer).
Remove from plastic, and roll into a circle large enough to fit a pie or tart tin.
Use according to the directions for whatever pie you’re making.

Tonia Moxley is a Virginia-based journalist and freelance writer who excels in the kitchen, but dislikes shopping for a bathing suit.