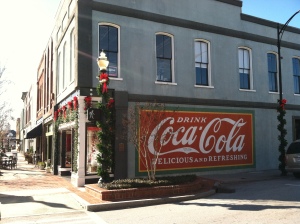 The family of a dear friend of mine recently finished the final touches on a lux, three-story cabin on a wooded lot overlooking Lake Lanier in North Georgia. It makes for the perfect get-away spot, so our group of friends from high school, still close after all these years, agreed to meet there for a two-day reunion.

My husband and I made our way there the day after Christmas with bourbon cake, tinkling wine bottles and presents in tow. We snaked along various curvy, two-lane highways from Kingsport, Tenn., to Gainesville, Ga., through the Great Smoky Mountains National Park and the Cherokee, Nantahala and Chattahoochee national forests. High vistas, low river bottoms, dense forests and little human development made the drive as stunningly beautiful as it was slow and tedious. 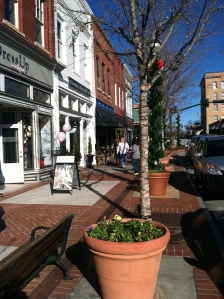 It had grown dark when I noticed we were passing the Foxfire Museum and Heritage Center, of the Foxfire Books fame. I noted with deep disappointment that it closed at 4:30 p.m. and we were two hours too late. The website says the center, like the book series, was a product of high school students documenting their heritage.  In the mid-1960s, they interviewed countless locals about their lives in Georgia’s mountains and were often given artifacts from bygone days. Since the land was purchased in 1974, some 20 historic and reconstructed log cabins, a grist mill and a chapel have been added and filled with those and other artifacts. Taken together, the museum offers a glimpse of our people’s pioneer past that is nearly vanished. I fully intend to stop in the next time I’m in the area.

The following day, we did a little exploring in and around Gainesville, which sits about an hour north of Atlanta on the southeast side of Lake Lanier. Its official population is a deceiving 30,000. Like other states in the south, Georgia’s land use laws make annexing difficult, so the population the city serves is actually larger by about 100,000. The town’s big industries are tourism and chicken. The latter earned the city’s moniker “the chicken capital of the world” and is celebrated in “Poultry Park” which features a chicken atop a granite obelisk. In recent years, the industry has brought an influx of Hispanic people to the area.

We found the town square a delightful, highly walkable mix of shops, upscale and casual restaurants with an attractive park in the middle. We stopped in the chic Inman Perk Coffee shop for an afternoon caffeine fix and found it busy with professionals and students, presumably from nearby Brenau University and Gainesville State College.

The city’s crown jewel is its historic Green Street, a row of stately, antebellum mansions, some private homes and others businesses. Decked in their Christmas fineries, they were every bit as striking as scenes from Athens or Savannah. I highly recommend parking and strolling the entire length of the street for full effect.

Lake Lanier, which turned 50 in 2007, was dammed with the Chattahoochee River (it gets hotter than a hoochie coochie) and supplies Atlanta’s drinking water. It’s been a popular recreational site for big-city escapees, so much so, that the number of docks may soon be capped at over 10,000. When I was

there, water levels were shockingly low, with red, bare banks and boats stranded forlornly on the lake bottom, apparently from a record-breaking drought this season. It gave me pause, calling to mind the difficulty the Atlanta region has in providing infrastructure and resources to its booming population.

It was a short trip, and before we knew it, we were on our way home. We took Ga. 52 back to Kentucky and were pleasantly surprised to find its hillsides terraced with apple orchards. Called “apple orchard alley,” 11 of the county’s 18 apple orchards fan out along the valley.

Roadside stands boast U-pick, fried pies, apple butter and other products. The best time to visit is during the fall harvest. The area offers special events throughout the year, though, so check before you go to see what’s scheduled.

We rolled into McCaysville, Ga., which straddles the state line with Copperhill, Tenn., with a sense of surprise. The quaint main street was bustling with people strolling about, shopping and taking pictures. They’d been riding the Blue Ridge Scenic Railway, which stops at McCaysville for several hours.

Historic signs told me the area was famous once for copper mines that corroded the land for 40 square miles, leaving it a denuded, dusty desert as recently as 15 years ago. Jessica Thomas, a Charlotte-based design professional and our host for

the weekend, has distant family members who worked at the copper mine before it closed in 1987. “It’s amazing how different the mine site looks than when we were kids,” she wrote in an email. “It used to be nothing but red clay over an area so large that astronauts could see it from outer space. Now there are signs of life.”

Indeed. In a 2007 travel piece, The New York Times reported that now that the landscape has been reclaimed, retirees, second home buyers and entrepreneurs, many from Atlanta, are breathing a new life into the weathered but charming downtown.

We ate lunch at El Rio, a busy, fun Mexican restaurant and perused a few antique stores made lively with seasonal decor. On our way out, we saw the Ducktown Basin Museum, which holds fascinating exhibits about the mine and a bird’s-eye view of the original circle of devastation.

We left North Georgia thinking we’d have to come back soon to explore more. We passed so many parks with outdoors activities and small, adorable mountain towns. There really is so much to do and see, and all of it within short distance of Atlanta.