Knoxville Girl or The Scruff Dreams Are Made Of

The Henley Street Bridge in Knoxville, Tenn.—a stunning arched connector that spans the Tennessee River and joins the downtown area with south Knoxville— is being dismantled and rebuilt. The bridge, completed in 1931, has already been closed for a year and may remain closed for another two years while workers reconstruct the deck and attend to other structural problems. I often see its broken, topless formation as I accompany my mother to her various doctors’ appointments in our hometown.

Since my mother moved out of her home into a skilled nursing facility, we rely on the services of the city lift van to transport us. The van windows offer a vista of the cityscape I can’t appreciate when I’m driving, and since I haven’t lived in Knoxville for 30 years, I continually search for the familiar milestones of my childhood. Many of those are, like the Henley Street Bridge, either in various states of transformation or long gone. 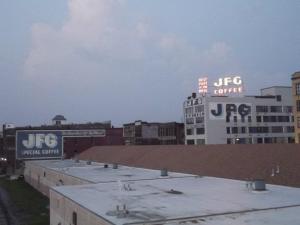 Traveling west on I-40 out of east Knoxville with my mother, we often remark on certain parts of the city that remain unchanged. The ruins of squat brick warehouses below the interstate jut up in crowded batches and straddle the railroad beds laid down in 1855. The venerable Immaculate Conception Church, also established in 1855, sits undaunted, though somewhat dwarfed, in a concrete landscape of hotels and high rises. The JFG Coffee sign is still visible, but the Sterchi Brothers warehouse on Gay Street has been transformed into loft apartments. The boy narrator in Knoxville author James Agee’s A Death in the Family described the “great bright letters” of the Sterchi’s sign while walking with his father along Gay Street in 1915. In my old neighborhood, the Sterchi family donated part of their farm land to build a public elementary school the year before I started first grade. For eight years I knew the hallways, classrooms, and playground of Sterchi School as well as I knew my own name.

In the neighborhood of Fountain City, where my family lived, shopped and socialized, the Fountain City Park still abounds with noisy children while across the street the old Hotel Avenue storefronts keep reinventing themselves. Ducks, swans and geese lace the quiet waters of Fountain City Lake, oblivious to the rowdy behavior of impatient motorists speeding down Broadway.

I grew up here in a modest house my parents built before I was born. Knoxville was a mid-sized southern city, and I took advantage of city amenities—paved roads with street lights, public parks and schools, stores, bus routes—but I could also walk a couple of miles in any direction of my house and be in deep woods. Growing up in North Knoxville in the 1960s meant more undeveloped and rural spaces than urban ones, and we made our own play in the backyards, forests, and creeks of our domain. Being true kids of suburbia, we often would watch a drama on television then run out to the woods to elaborately reenact it.

I knew nothing of what Knoxville historian William Bruce Wheeler calls the “politics of parochialism and paralysis” that plagued my city during my youth. I did not understand that outsiders looked on Knoxville as a dirty, undeveloped backwater until after I had moved away and the city was gearing up for hosting the 1982 World’s Fair. A Wall Street Journal reporter scoffed that Knoxville would fail in bringing about a world expo and called Knoxville a “scruffy little city on the banks of the Tennessee River.” City leaders took offense. Native daughters and sons rallied to the cause, but the “scruffy little city” phrase stuck and has today been reclaimed as part of Knoxville’s accepted identity. “Keep Knoxville Scruffy” can be seen on t-shirts. Knoxville’s most popular and prolific journalist/historian, Jack Neely, has a weekly interview show with Knoxville residents called “The Scruffy Citizen.”

Name-calling by the national press resulted in collective action that I now know is often associated with Appalachian sensibilities: self-reliance grubbed out of grit, pride of heritage (Knoxvillians are quick to name their kin and the very specific neighborhoods where they live), an unkempt sense of humor, and a rumpled, slightly distrustful outlook.

In Knoxville we never referred to each other as Appalachians, certainly not urban Appalachians, although it was clear that most of the people my family associated with were country people, one generation removed from mountain farms, plowing out a living in the city.

Now my own daughter, who did not grow up in Knoxville, has moved there to start her professional life as a speech therapist. She is living in my mother and father’s mid-century house with its shabby roof, dark paneling and cramped, untidy closets. But she’ll remake the place, I’m certain, reinvigorating the hillbilly spirit of my parents who learned to live happily, just like I did, in a scruffy little city.

Marianne Worthington is co-founder and poetry editor of Still: The Journal, an online literary journal publishing contemporary literature of Central Appalachia and the Mountain South. She lives, teaches and writes in Williamsburg, Ky.