John Haywood is Back Home Proud

This is the first installment of our “Back Home Proud” series, a re-occurring feature in which Apps and Ex-Apps tell us, in their own words, what their Appalachian identity means to them. In keeping with our “Rural Retreat” issue, we hear from John Haywood, a painter and musician, who moved from Eastern Kentucky to Louisville and back again. He now operates his own tattoo parlor on Main Street in Whitesburg, Ky.

Anyone who is an artist and raised in the mountains, especially a holler or some other place that is void of a lot of urban contact, knows the great turmoil that is placed upon someone with an overwhelming artistic urge.  Turmoil?  I guess I can only speak for myself and a few other artist friends that I know who grew up in the coal fields of East Kentucky.  Some of those artist friends have left never to return, while others like me left to never return yet somehow came back.  Some of us come back with our tails between or legs, and some with an overwhelming sense of purpose and new understanding of what it means to be from the mountains. 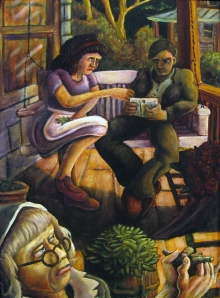 "Breakin' Up Beans" by John Haywood at http://www.haywoodart.com

For those not familiar with East Kentucky, let me describe it a bit.  When I speak of East KY, I don’t mean Berea, or Richmond, home of Eastern Kentucky University. I only say this because in my travels I have met so many folks who associate East KY with those towns mentioned above.  I would argue that those towns serve as a nice, cushiony gateway into the area that is to me East KY.  Before you get to East KY, the interstates stop and the roads get curvy.

It’s easy to romanticize about the mountains and the countryside, but there is also a struggle here and poverty.  There is a drug epidemic, lack of education and healthcare.  There is little to no access to healthy food, at least in the grocery stores.  In spite of this, we have a deep connection with the area and those who reside here do so because our families have for generations.  We still raise gardens, go hunting, make moonshine, pick banjos, play fiddles, work in the coal mines and go to church on Sunday-  just like our ancestors, but we are so much more.  We are a hard working people determined to survive in a land that we love, where sometimes the cards are stacked against us.

So then about that turmoil. As a young teenager, I dreamed of being a great artist or heavy metal guitarist, yet my dreams were constantly shattered when I was told that was impossible to be in East KY.  I avoided many of the traditional folk arts because I felt they represented a negative stereotype.  By embracing heavy metal and punk rock, I dressed different than my schoolmates and was even called a devil worshiper and freak.  I even got in fights over it.  Art was not a viable option for a steady career in the eyes of many.  Needless to say, I left to never return. 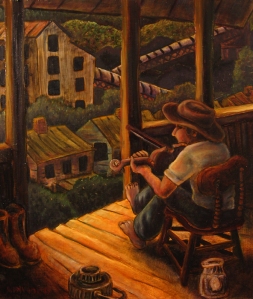 "Off Work" by John Haywood at http://www.haywoodart.com

Living in the Louisville was a great experience.  In the seven years I was there I learned a lot about art and music.  I played in bands, did art shows, got a masters degree from the University of Louisville and learned the art of tattooing.  When I started getting news from home of close family members being sick and terminally ill, I regretted much of my rejection of the old ways.  My papaw who was sick with black lung and diabetes, and who used to take me to the Old Regular Baptist Church when I was little, had to watch his youngest daughter die of cancer.  She was my mom’s sister and we all called her Sis growing up and did until the day she died.  It was the most heart wrenching moment of my life.  My wife and I then decided to have children, take what we learned from our big city experience and go back to the mountains.

And yes, the turmoil is still here.

My name is John Haywood, I am a painter, musician and tattoo artist residing in the mountains of East KY.  I once had a blossoming career in the big city of Louisville.  I had finished my master’s degree at the University of Louisville.  I was an adjunct professor at Jefferson Community and Technical College.  I was a tattoo artist for Big Daddy Tray in Radcliff, KY.  I traveled playing music and doing art shows.  I left it all to come back to the mountains.