From the Hollers to City Streets: A Review of 2/3 Goat’s EP “Stream of Conscience” 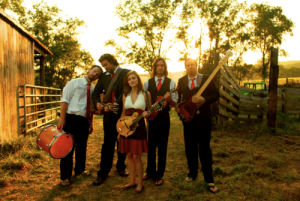 The video for the title track of 2/3 Goat’s EP Stream of Conscience features members of the New York City-based band standing knee-deep in a stream in the mountains of Central Appalachia. Lead singer and mandolin player Annalyse McCoy belts: “Stream of conscience hear my cry / I don’t want my hills to die.”

The video intermixes a fictional family’s daily life in the coalfields with harrowing footage of mountaintop removal (MTR) coal mining, which has destroyed more than 300 mountains in the region. In later scenes, the band walks down a country road with coal-dust covered miners, young people, and families in a rambling, spontaneous protest march. It truly is a visual evocation of Appalachia Rising—a tagline of the region’s anti-MTR movement.

The other core members are guitarist, song writer, and vocalist Ryan Dunn and fiddler Ryan Guerra. 2/3 Goat is a self-proclaimed metrobilly band, a portmanteau referring to the music’s urban audience and its roots in country and mountain music. Its acoustic-driven, bluegrass- and old-time-music-inspired sound has engaging harmonies and a sweetness and honesty to it. The other tracks on this five-song release are strong, both in musical composition and storytelling. “Lay It on the Line” is a playful duet between McCoy and Dunn with upbeat fiddle, guitar, and mandolin accompaniment that will make you want to flat foot (if you have enough mountain swagger to pull it off) to this almost-love song. “Band of Gold” highlights McCoy’s textured alto voice and ability to wail when the lyrics call for it. The tone is emotionally heavy, but the fiddle accompaniment and the shift in tempo at the end of the song save it from needing a side of whiskey to wash it down.

While referencing traditional mountain and bluegrass music, 2/3 Goat’s sound fits in nicely with contemporary folk and indie-inspired rock such as the Yep Roc label’s Cheyenne Marie Mize, Stockholm-export First Aid Kit, and English chanteuse Laura Marling. Dunn’s singing style evokes Dan Tyminski of Union Station fame. 2/3 Goat’s music carries on the tradition of Hazel Dickens and Jean Ritchie, two Appalachian singer-songwriters who lived in cities outside of the region for most of their careers. McCoy’s cadence is reminiscent of Dickens, whose social justice anthems and ballads narrated the late 20th century labor movement, while “Stream of Conscience” feels akin to Ritchie’s song “Black Waters,” a traditional music breakthrough in 1977 that was a statement piece about strip mining methods of that era.

One of the band’s key messages is that MTR affects all Americans, not just Central Appalachians, as the coal is used to produce energy for those of us outside the region. McCoy is a member of the creative and social action collective New York Loves Mountains, comprised of expatriate Appalachians who promote and spread the message that MTR hurts all of us from the hollers to the boroughs. So 2/3 Goat is a mission-minded folk rock group that wants to get you out of your seat and on your feet dancing … all the way to the front of the stage, or to the picket line, or to your legislator’s office, or the coal company’s front door.

Reprinted with permission of the good folks at Sojourners Magazine. A version of this article was published in the June 2012 issue.

Beth Newberry, The HillVille co-publisher, is a former Sojourners editorial intern.  Sojourners generously allowed us to reprint this story. Visit http://www.sojo.net for more coverage of music, politics, faith and culture. They do good stuff.